COPENHAGEN, Denmark - Caroline Wozniacki’s Australian Open success was celebrated on Monday with an event at Parken Stadium in Copenhagen.

It was Wozniacki's maiden Grand Slam title, at her 43rd attempt, having fallen previously against Kim Clijsters and Serena Williams in US Open finals before.

In commermoration of her achievement, the 27-year-old played an exhibition match against Venus Williams in front of a sold-out crowd of 12,500, and the competitive match was claimed, 6-4, 6-3 by the WTA World No.2.

It was the fulfilment of another dream that the Dane has long held.

”It’s a great honor to play Venus here in the national football stadium,” she said.

”The last time she was here and I met Venus for the first time I was just 12, back in 2002. A lot’s changed and I’m really excited and honoured to be here.

”It’s a little bit of a different scenario this time around than it was 16 years ago. But I had a dream and that dream came to life so now I’m part of it. I’m taking every opportunity like this. I’m really proud of all the Danish people that came out to support. Hopefully, we’ll be back again soon.”

Earlier in the day, Wozniacki had been granted a reception at Copenhagen City Hall, before she faced good friend Williams, the WTA World No. 8, in the evening.

It was an event that attracted many of Denmark’s top stars, including footballer Nicklas Bendtner, who presented her with a bouquet of flowers before the match.

In the crowd, meanwhile, were legendary footballer Brian Laudrup, veteran musician Bent Fabricius-Bjerre and actor Mads Mikkelsen, who has starred in such films as Rogue One: A Star Wars Story and Casino Royale.

Before Wozniacki took to the court, the fans were regaled by a match between local junior prospects Hannah Viller, 16, and Clara Tauson, 15, which the younger player secured, 6-0, 6-0. Tauson had previously broke Wozniacki’s record of being the youngest Danish junior champion, claiming the crown when she was just 13.
Top 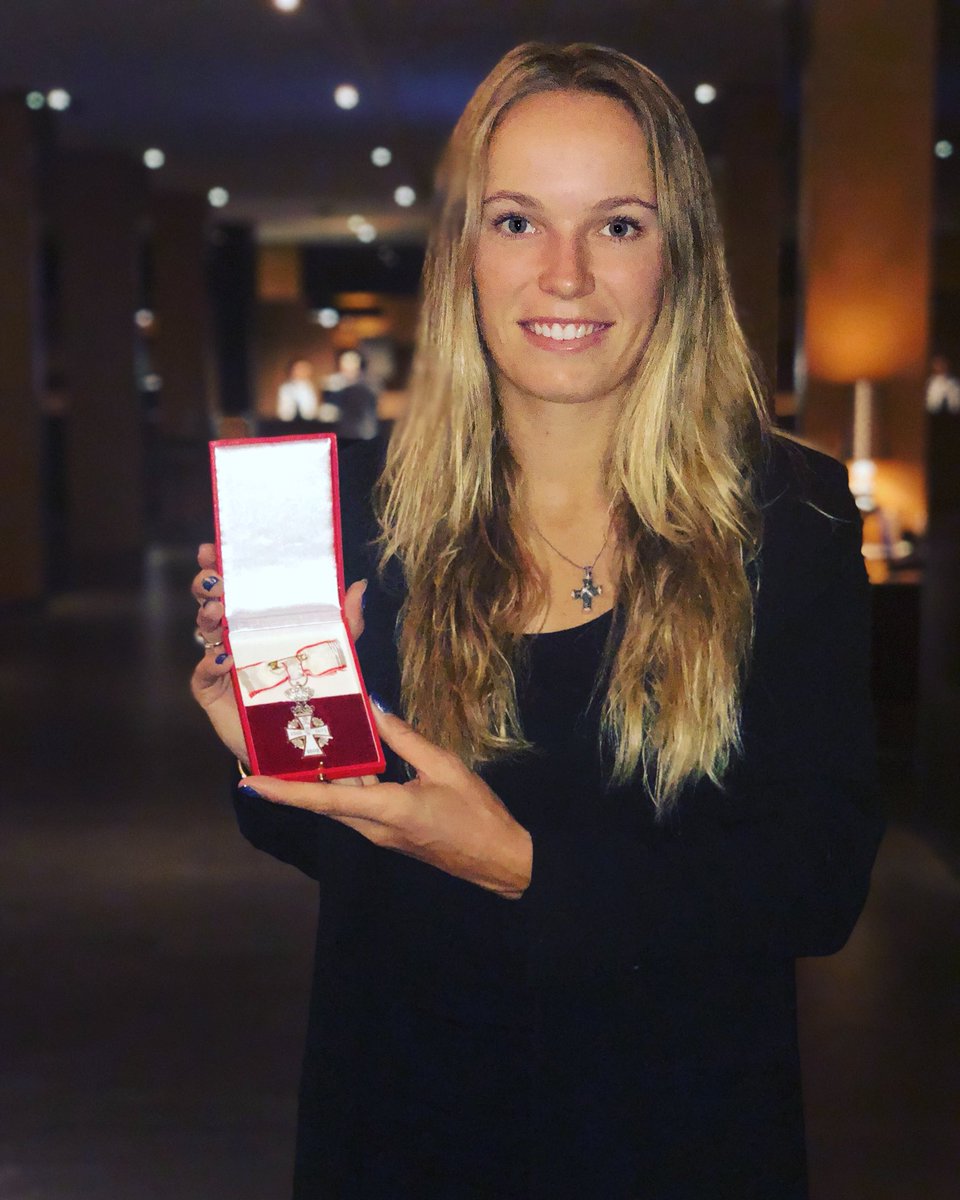 Such an incredible honor to receive the Damehood of the Dannebrog order today!

For the great honour.

No.2 Caroline Wozniacki kept her chance of reclaiming World No.1 alive at the Mutua Madrid Open after coming from a break down in the final set to defeat Ashleigh Barty in the second round.
May 7, 2018
MADRID, Spain - No.2 seed Caroline Wozniacki kept her bid to reclaim the World No.1 ranking alive with a thrilling second round comeback in Madrid on Monday, defeating Ashleigh Barty, 6-2, 4-6, 6-4.

The Australian Open champion found herself on the brink of defeat against the unseeded Australian No.1 as she trailed 4-2 in the final set, but ran off the last four games to stay in the tournament after a two hour and five minute battle.

"She played extremely well, I thought. She wasn't making any errors at one point. I think it kind of turned around when I got that net cord. It went over, and instead of being 5-2 for her in the third, I still had a chance to kind of survive," Wozniacki said after the match, referencing a moment in the seventh game of the decider which helped her break serve.

"I think that's where it changed a little bit. I just kind of stayed in it, and then I served pretty well to close it off."
Top

I looks like Caro will next play in the new season. Only small ITF tournaments left

Yes, she will play first next year, starting in Auckland
http://www.carolinewozniacki.net

Btw, I has post some info about next year's Entry Lists, remember to read it a Password is needed... ask me if you don't know it...
http://www.carolinewozniacki.net

Great Photo Jorn! All happiness to Caro and Husband

Users browsing this forum: No registered users and 0 guests